First Shiner makes a Pale Ale which turned into one of my favorite session beers in Texas, and these guys are making a Farmhouse Ale! In the words of Wally from Dilbert "that's crazy talk". Anyway I found a nice six pack of the FM966 at the Kroger by my house. That Kroger must know some beer nerds are near by, as they went from standard BMC fare to plenty of Saint Arnold, all three Karbach, and seasonals from Sam Adams and Shiner.

Shiner FM 966
Poured this one into my Central Market Brewniveristy tulip glass. I forgot how badass Marcus Allen was... Pours orangish and clear with a lasting white head. Nose has a nice sourdough cracker and lit banana. The taste is a light lemon sourness and choppy carbonation. The beer has a flavor that's hard to nail, but its almost like a leathery saddle or something. I think that's perfect for the farmhouse style. Congrats to Shiner for making very clean beers with ever expanding styles. Low 3 stars for me, still not a huge sour man. I always wondered what would happen if the cleanliness, skill, and consistency of a 100 year old plus brewery put its food in craft beer. 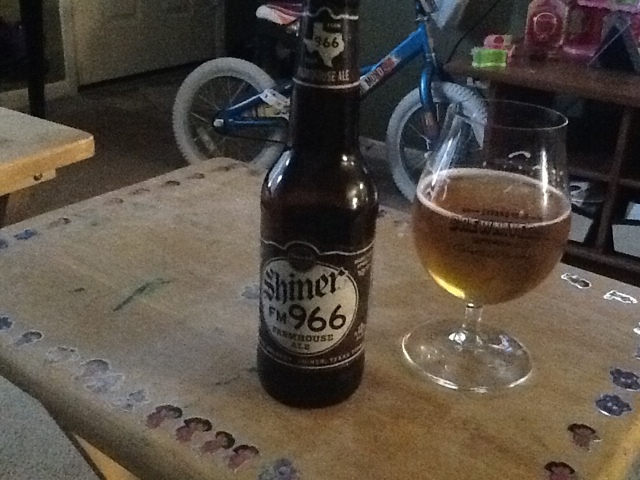 Posted by The American Don at 2:28 PM

What's, "lit banana?" Little banana? Burned banana? The people want to know. & I feel you on the sours.

Is there a good contact email for you?
We are reaching out to introduce you to our Incubator Brewery project. There is nothing like this idea in the world and it could really help put Houston and all of Texas on the map as an innovator in craft brewing.
Please check us out at Http://kickstarter.breweryincubator.com

Go buy now on iTunes and other fine online retailers for only .99 cents!!

Check out the music video now on youtube!!
http://www.youtube.com/watch?v=X06H7IVEbAY