So the wife picked up the party pack of the Sierra Nevada Beer Camp beers. I understand these beers were brewed by some big time beer enthusiasts who send in videos. The beers are usually then sold off on the market, probably for charity. Typically I'm not a weizenbock fan, but I'll give it a try.

Sierra Nevada Weizenbock
Orangish straw color with long lasting low head. Nose has banana ester and veggie nose. Beer has a nice moderate syrup sweet flavor, something akin to plum, and a nice amount of crystal malt. I'm getting a nice softness that is obviously attributed to the wheat. I would even give the kudos for the high carbonation, which works for both bocks and weissebiers. I absolutely loved the 4 star Glissade this year (not so much last year's), and love a good german wiesse bier. You know what. 4 stars for this one. Nice and simple, yet very good and very refreshing. A welcome change from SN's typical cascade hop glory beers.

Speaking of hop glory
Sierra Nevada Double IPA
Clear and straw. Big white poofy head. Oh yes lord. Huge piney/citrus/grassy hops. Very fresh and a DRINK NOW IPA. The beer is just barely balanced with the malt, and has the right crispness to keep from being cloying on the palate. Has that steely malt feel to it. Yes sir yes sir. It is extremely strong, a pinch acidic, and yet jumps right off. I just need some spicy crawfish from Hanks or some chicken from Fainmous BBQ with the hot BBQ sauce and I'm in there. High 4 stars.
Posted by The American Don at 7:07 PM 1 comment:

Sure could use some beering

Beer Log: Right now
State: A little wired from a funny day
Mikeller Coffee IPA
Huge tinged red head with a slightly cloudy copper colored. Would've thought this one would be black. The brothas can't have NOTHIN, not even coffee beers. Beer has lots of hops on the nose. Seems like a regular potpourri of hops, lemony, grassy, citrusy. Beer is rather smooth and thick yet thin on the body. The hops don't come out as strong as I'd thought, and I'm really digging for that coffee bean flavor. Just a basic IPA without enough carbo but a nice hops when I eat the some rice and steak. Growing on me now. Still not telling where the Guji coffee is. But it is cool that it's Swedish and all. 3 stars
Posted by The American Don at 7:10 PM 1 comment:

Pours a deep brown with the head falling over itself like a Guiness. Good mix of sweet caramel malt and the banana esters. Head is sticky and lacy, light tan. Also that's some good chop. This one has a nice maple syrup and steely malt thing going on as it warms up. I like how smooth is and whatnot. no homo. Something about Dunkel Weisses just kinda rub me the wrong way (nullus), and I never got over it. After Divine Reserve 7, everything else is blah. I like the light banana and high carbo of the German Wiesse, or the caramel crisp of a dunkel lager. Just can't put them together and put up an elite beer. Maybe someone will prove me wrong. Low 3 stars.
Posted by The American Don at 8:03 PM No comments:

Oh what a day yesterday. Started out donating a bunch of my daughter's old clothes to a church that's going to get the stuff to the folks in Alabama. Then made our way up to an old friend's house in the Kingwood area to drop off the kid while we hit the Texas Beer Fest ... Oh yeah, did I mention our printer didn't work so I had to hunt down a printing place in the Kingwood/Humble/Lake Houston area to print out my tickets for the beerfest. Um, if you thought it was tough to find Bin Laden, try finding a printing place. After an hour roaming around the Upper Northeast Houston, we made it to the festival.

The wife and I didn't know what to expect, and honestly had not been to a beer festival like this before. I got a GREAT cheeseburger at this school bus like joint. You walk in and there were a half-dozen or so portable food trucks (nice stuff), as well as stands for various types of hot sauce, beer desserts, and sweetbread. Nice stuff.

I'll tell you know that I knew enough to know that there was NO POINT in trying to to detailed beer reviews. With maybe a couple dozen stands of different beers, I'll just hit the highlights. I counted a couple hundred people in the quaint rodeo stadium while I was there. Live 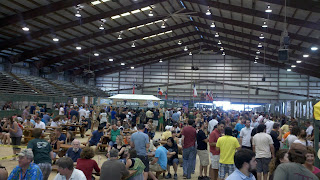 music going on in the back, but not too loud. And a special stand with rare beers being tapped every half hour.

I just loved how we had so many new breweries in town checking things out. Thirsty Planet , Circle , and something out of College Station (only three days old mine you) called New Republic. Of course No Label was there serving that bomb hefeweizen. Our favorites were there of course with Southern Star pouring their Jasmine Bombshell Blonde and Independence debuting a new bitter. Each stand had about 3 beers mostly in jockey boxes. The 2 oz pours were sad, but probably a good idea, with the place seemingly crawling with cops. Cops that seemed to be in line just as much as I was. Nothing but a new pilsner by Avery and the Utah beer was lower than 5% ABV, so everyone was feeling nice the whole time. 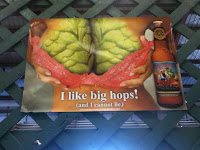 As we tried a number of new (to us) beers, special releases and others, I couldn't help but want to take a few hits of the Thirsty Planet Buckethead IPA. An excellent huge hoppy beer with a splendid mixture of several types of hops. At the cold temperature and fresh, it was just right for my tastes. High 4 stars. I even remembered that beer while drinking Heineken with the brothas while watching the Mosley/Pacquiao fight. Another great balanced IPA came from our boys at Squatters with the best beer poster would be awesome.

On top of that they had a serious amount of commercial craft beer courtesy of many of the beer distributors. Unfortunately those guys did not seem to get as much love as the local beers, but I guess that's how it has to be at the Texas Beerfest. I really hope they come back for another year. Somebody is having a beer festival of sorts in Hermann Park, and those guys slapped up Groupon just before the TBF. I know somebody in our house not named Don or Bella bought Ptickets for that one even though we would all be out of town. Best of luck for the Houston Beer Fest with a tremendous lineup of beering. I just hope that as more breweries pop up and the laws may soon change in our favor, we will see more festivals such as this. The bigger beer dinners already sell like hotcakes, so it is safe to say something is stirring in the Bayou City. And I'll drink to that.
Posted by The American Don at 4:52 PM 2 comments:


Pours really clear and tinged straw with a big long lasting white poofy head. The nose has something like oranges, flowers (which I'm assuming is lavender), and something kind of estery. The taste has a shock of potpourri and melds quickly to oranges, sugar sweetness, and citrusy hops (maybe orange peel). Medium bodied beer that kind of goes a few places. Lots of flowers and hops. A lot going on in that beer, which counts as complex. Didn't really knock me off my feet, but tasty. Lots of carbonation in this one. Probably could have benefitted from a reduction in the hops, but maybe that's just me. 3 stars.
Posted by The American Don at 7:44 PM No comments:

Some IPA from Tampa 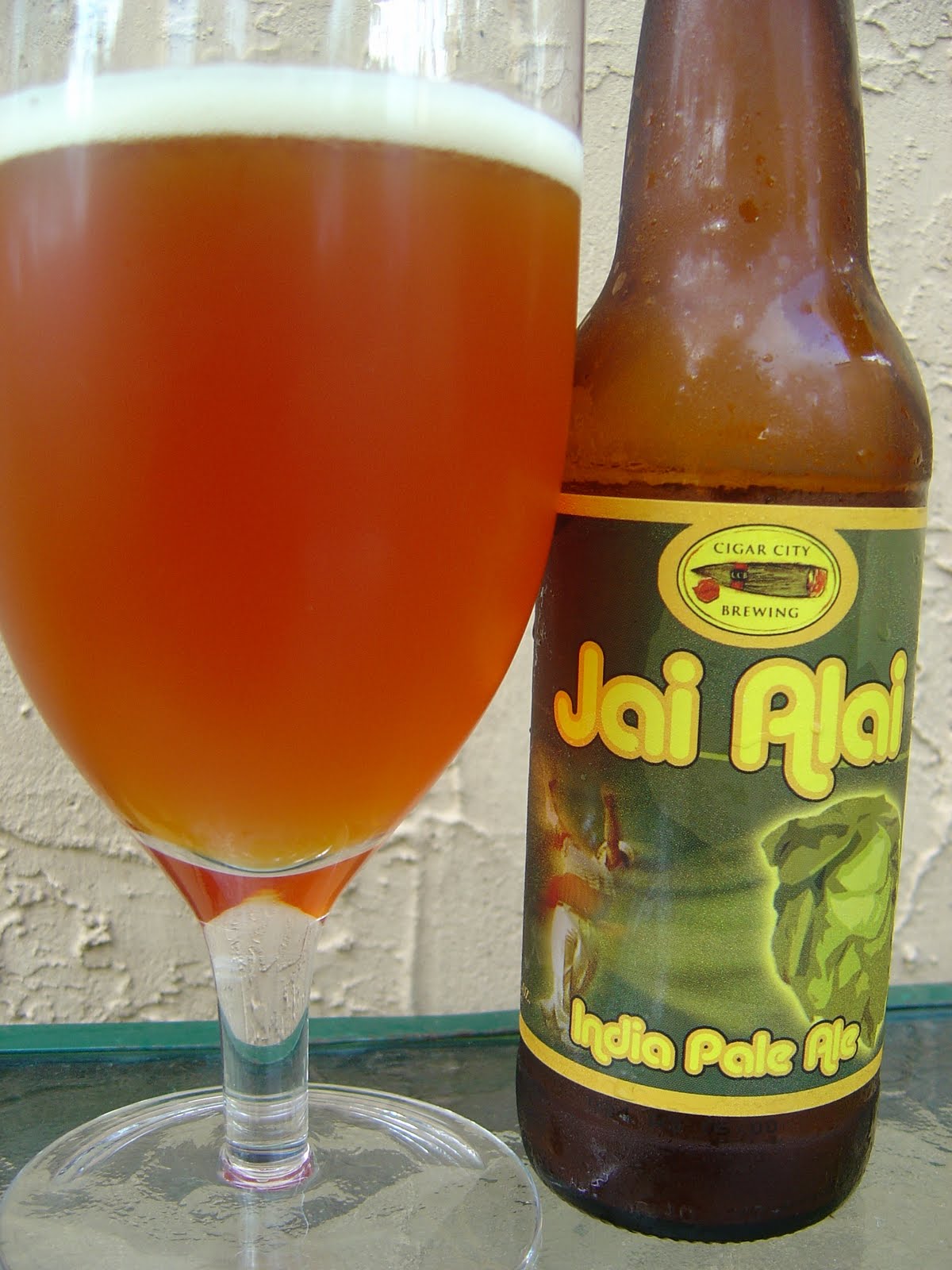 So the wife just handed me a Cigar City Jai Alai IPA just as I was finishing my Firestone Walker Pale Ale. That is soooo sweet. Good woman there.

Nose has a great grapefruit and fruitiness to it. I'm getting something akin to nail polish as well on the nose. Could be my imagination. Rather cloudy and orange with a big white soft head (no homo). Beer has a fruity thing going with a bunch of bitters and some sours going own. The beer has a light chalky thing going on. The beer is about as bitter as can be without being what I could call hoppy. Lots of grapefruit malt and citrus everywhere. Not sure where to take this one. Has a light bready finish, yet still rather sugary sweet. It's just like the sport of Jai Alai. Cool to watch but damned quirky. High 3 stars.
Posted by The American Don at 7:31 PM 1 comment: